The dedicated Remote-Controlled Browser System (ReCoBS) TightGate-Pro provides preventive protection against attacks from the Internet. This makes it regularly more effective than any filtering system such as malware scanners, firewalls or intrusion detection systems (IDS). TightGate-Pro is a dedicated ReCoBS protection system that is deployed as an appliance upstream of the corporate or government network. The programs for free Internet access (Internet browser) are no longer executed on the workstation PC, but on TightGate-Pro.

Access to the Internet is exclusively from TightGate-Pro. Only the screen output of the browser is transferred to the internal network and displayed on the workstation PCs.

Notice: Further differences in detail are explained in the respective setting options. 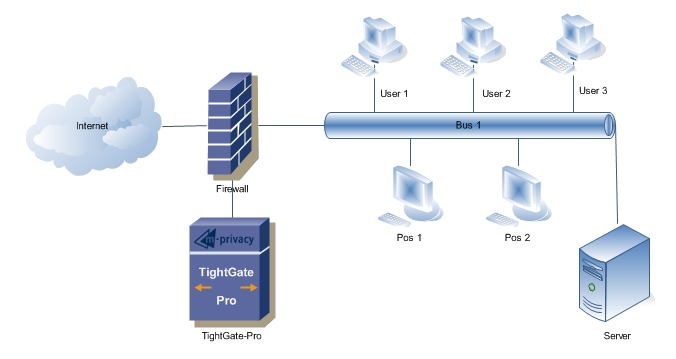 TightGate-Pro is regularly integrated into the organizational infrastructure in the Demilitarized Zone (DMZ) immediately behind the first firewall. Should this not be possible for technical or organizational reasons, there is nothing to prevent a direct connection of the protection system to the Internet from a security point of view. The strong self-protection of the ReCoBS server prevents negative influences on the level of protection as far as possible.

Workstation computers from the internal network can use the secure services of TightGate-Pro. At the same time, suitable packet filters must be installed upstream to ensure that the workstations or the Internet-bound applications installed on them (Internet browsers, e-mail programs, etc.) can no longer connect directly to the Internet outside the internal network. The transition to the Internet is made exclusively via TightGate-Pro. If necessary, direct connections to trustworthy remote stations (online banking, VPN, etc.) can be permitted by the administration, provided that attacks on the internal network via these connections can be excluded with sufficient security.

Users should only use the client computers with limited user rights. The system administrator must ensure that the TightGate-Viewer is not started by the user with administrative rights in order to prevent permanent anchoring of unintentional or unauthorized changes to configuration settings on the TightGate-Viewer. TightGate-Pro can only be used with the TightGate-Viewer. Other VNC viewers either cannot connect to TightGate-Pro due to a lack of functionality (e.g. encryption methods) or do not meet the requirements with regard to certain security precautions or procedures. The system administration must ensure that the installation and operation of alternative VNC viewers on the workstations is not possible.

Warning: TightGate-Pro does not offer any protection against attacks that affect the client computers or the internal network via network channels that have been released elsewhere. Basic measures to protect the operating environment of TightGate-Pro must be taken by the system administrator.

Operating system and communication protocol of the server

All user accounts and user sessions initiated by logged in users (VNC users) are completely isolated on TightGate-Pro. There is no mutual access or influence. VNC users are not equipped with administrative permissions that open up options for action beyond the user role.

Each user session on TightGate-Pro starts in a secure initial state. Essential security options are fixed on the server side. Subsequent configuration changes, such as settings in the program menu of the TightGate Viewer, are not stored permanently in the user context and are reset to the default values when the user session ends. Furthermore, TightGate-Pro does not retain any active content from an Internet session after it has ended. All programs and applications started on TightGate-Pro in the user context are automatically terminated when TightGate-Pro is logged off. A mutual influence of applications on TightGate-Pro, in particular with regard to the Internet browser used, is excluded by complete encapsulation of all software components in separate authorization spheres.

The combination of different hardening and encapsulation measures for the self-protection of TightGate-Pro according to the state of the art in connection with a function-specific protocol for communication with the client computers results in an extraordinary degree of security robustness. This applies in particular under the a priori assumption that individual program components of TightGate-Pro may be afflicted with inadequacies with regard to program logic or implementation.

In the course of the installation of TightGate-Pro, therefore, none of the measures described in Section 1.4 are necessary to achieve the intended level of protection.

The administration concept of TightGate-Pro

TightGate-Pro has factory default administrator roles that replace the traditional administrator (root). None of these administrator roles have comprehensive access rights to the entire system (superuser privileges). The advantages of this decentralized administration concept are on the one hand the protection of the system and the user data against a functionally inappropriate omnipotence1). On the other hand, by mapping individual administration processes to several roles, it is possible to delegate tasks. The concrete authorizations of the respective roles are summarized in a table in the appendix to this administration manual.

The administrator account config was created for the system and security administration of TightGate-Pro. This is responsible for network settings and system-wide defaults, e.g. for user accounts. However, this administration role has no access to user directories and user settings. Most maintenance tasks can thus be delegated without hesitation under data protection law.

The administration account maint is responsible for the user administration of TightGate-Pro. Users can be created, access rights and restrictions can be set and passwords can be changed. This administrator also has the option of restarting individual services and, if necessary, activating remote maintenance access. A content control of user directories and data by maint is excluded.

The administrator accounts backuser and update were provided for maintenance tasks of TightGate-Pro. They have only a very limited range of functions and specially defined rights. The backuser is exclusively responsible for creating and managing backups and the necessary settings. The same applies to the update role when maintaining the system. Both roles have neither access to the network settings nor are they allowed to view user directories.

The central security of TightGate-Pro is guaranteed by the RSBAC access right protection. The RSBAC configuration is completely configured on delivery and must not be changed by administrators on a regular basis. The administrators root and security are available for editing the RSBAC security settings. Both are disabled by default.

Note: In TightGate-Pro (CC) version 1.4 servers for CC-compliant environments, the root and security administration roles are only available when the system is started in soft mode.

1)
The conventional concentration of all administration tasks and system rights in a central account endangers this in particular with regard to intrusion attempts. Unauthorized persons who gain access to such a user account gain access to the entire system.